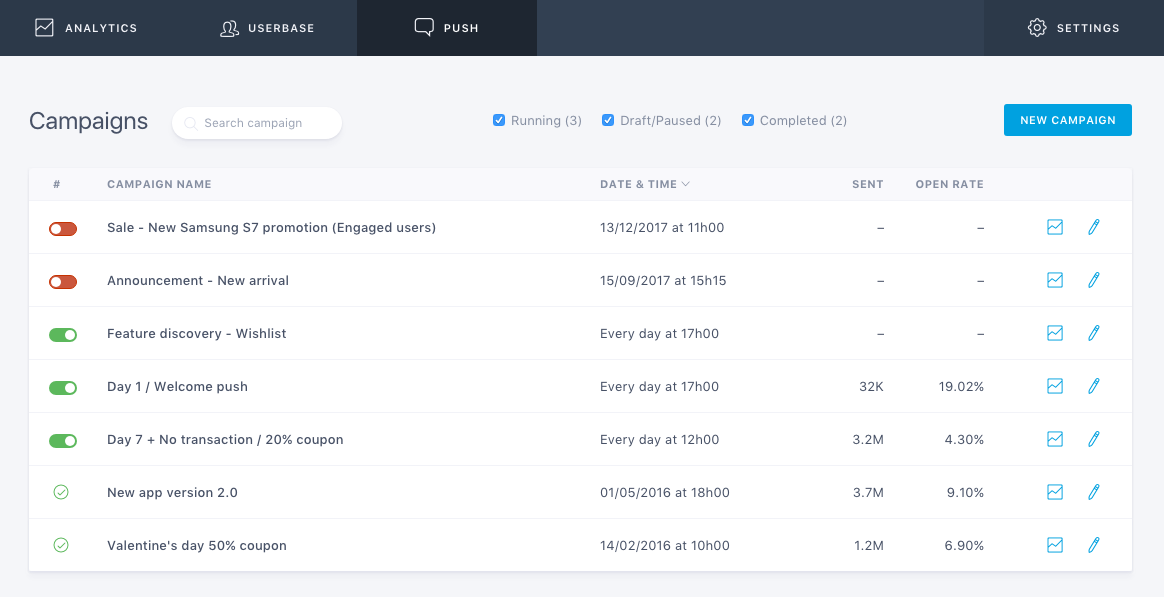 Understanding the results of a push campaign is key to analyzing the performance of a message. The campaign list gives you basic information on all your push campaigns:

Basic analytics are not available for campaigns sent from the API in dev mode.

If you want to see more detailed stats about a specific campaign, you can click the Stats icon in the campaign list. Let's dive into the details of the available statistics here:

You can find here global data on your campaign, since it has been created. The metrics displayed here can depend on the campaign's nature and status:

The Performance report is built like a conversion funnel. It allows you to measure your campaign's success at a glance:

If you attached a Mobile Landing to your push campaign, you will find additional stats:

The Delivery report gives you detailed information on the status of all the device tokens targeted by your campaign:

Batch also shows relevant information on your campaign if you are using the A/B testing feature. In the detailed results of your campaign, you will see how each message perform over time in a tabbed view.

If you want to track the number of marketing and transactional push notifications sent everyday from the dashboard or the Campaigns/Transactional API and see the global open-rate of your campaigns, take a look at Notifications, in the Analytics tab.

If you created a user journey, Batch will display an additional report in your campaign analytics. You will be able to see how many users are still waiting for the timer to finish and why they exited the user journey:

You will also see the number of push notifications sent every day from your trigger campaign: